South Africa has many impressive hotels and among them is Hotel Verde. The hotel is situated in Cape Town near the airport and it is South Africa’s greenest Hotel. Hotel Verde has won many prestigious awards and is an inspiration to other South African businesses to go green. Travelling Mystery Guest did a short interview with them to share their story with the hospitality industry.

“Verde” means green in Italian. Is this where the name, Hotel Verde, originated from?

It is Mario Delicio, along with his wife Annamarie, who are the owners and directors of Hotel Verde. They are originally from Italy, so this is where the Italian influence comes from, particularly in our restaurant, called Nuovo. It was the Delicio’s daughter, Anika, who came up with the name, Hotel Verde, to pay homage to the family’s Italian heritage and the hotel’s sustainability concepts.

Hotel Verde opened its doors in 2013 and you have already won a few awards. Was it difficult at the beginning to convince consumers to be more eco-friendly?

Hotel Verde Cape Town has been designed green – we hold a double LEED platinum certification by the United States Green Building Council, which looks at both design and construction, as well as daily operation and maintenance. A guest’s carbon footprint is reduced simply by staying at our hotel, so it hasn’t been difficult to encourage guests to be Eco-friendly. In most cases the choice to stay with us is already a sustainable decision. If they wish, guests can make their stay even more sustainable by using our energy-generating gym equipment, opting to take the stairs over the elevator, or reusing their bath towels. We also have a guest incentive program that rewards guests for going the extra mile in this way. By making Eco-friendly choices during their stay, guests can earn Verdinos and each Verdino is equivalent to R5, which can be redeemed against purchases at the hotel during their stay. 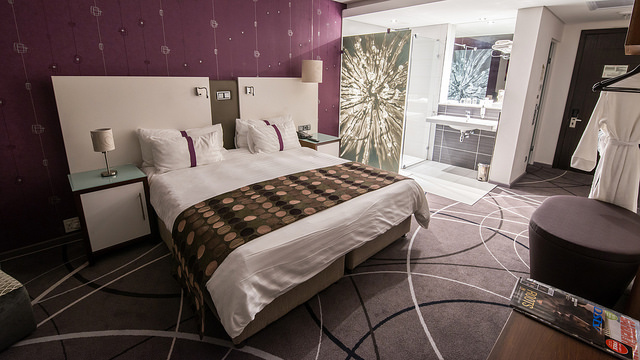 Being quite the trendsetter in South-Africa, are you planning to expand?

Our parent company, Verde Hotels, offers sustainable hospitality solutions with a turnkey approach. They currently operate within Africa and are developing a resort in Zanzibar, which will open in late 2017. This will be the second hotel under the Verde Hotels brand.

Was it expensive to start the hotel? Considering all the special equipment that you use?

The green budget of nearly 11% makes it possible that today, Hotel Verde Cape Town can operate the hotel at only 35% of water usage and a 35 % of power usage of a conventional hotel of the same size. It is therefore the best investment in the long term.

Are you continuously adding new ways to preserve the earth?

As technology progresses, new and more efficient practices are made possible. We are always on the lookout for improvements at Hotel Verde and continually strive to regularly review daily operations in an effort to go greener. An example would be our approach to the current water crisis in the Cape – we have created additional signage to encourage guests to save water and only refill conferencing water bottles on request, among other implementations. For our brand, the newest example would also be the new Hotel Verde Zanzibar, which in some areas have equipment even more efficient than what was purchased 5 years ago for Hotel Verde Cape Town.

Who / what was the main inspiration for the start of Verde hotels?

The Delicio family believes that we all have a responsibility to the planet and should live sustainably; it was this thinking that inspired them to conceptualize not only a hotel, but Africa’s greenest hotel. Each member of the family has had a hand in making Hotel Verde the way we know it today and our staff ensure that our values and sustainable practices work towards staying Africa’s greenest.

A special thank you to Taryn Hickson, Marketing and Brand Manager at Hotel Verde, who agreed to the interview.